I am currently flying over Nebraska. I think. Hard to tell, it’s rather dark out there. But gladly, I have more leg room in my present seat than I have had for the past two days in the back seat of a Suburban. Within one foot of my present location is first class. They get their drinks in real glasses and hot towels served at take off. If I stretch out far enough, my toes can obtain a little of that luxury. Ah, yes, even the air feels better in first class.

But I am in economy comfort, and I shall not complain. This isn’t all bad. Crammed in the back of that suburban, though, was sure hell. I contorted my body into the seat and performed a yoga position no book has ever published and no master dares teach. I was on another overnight business trip that may not bring fruition, and traveling with several companions in a Posse probably not fit to wear the smallest of Stetson hats.

On the bright side, the scenery was beautiful.

The west and far west of this country, with the exception of California, have always stirred something in me. I think I can appreciate the openness and also envy those in the trailer parks at the foot of the mountains. Sure, they may not have much of a house, maybe no cell phones, iPads, or iPhones, But the view? Stunning.

My traveling companions saw things a bit differently. For them, I have little much to say at this point. If they choose not to appreciate their surroundings, that’s their loss. Me, I had my boots on.

Every trip I make brings about a certain amount of curiosity, adventure, or an event that just makes you scratch your head and walk away. This one had moments from all the above, but I’ve been sworn to secrecy on a few.

However, I did find it quite strange to have received a room at the inn that was quite literally the size of my home kitchen, dining room and living room combined. Let me ask you a question, if you were to walk into a room and find it to be the room for the disabled, and you had no disability, would you suddenly wonder if the guy at the desk was playing a prank? I will say this, the bathroom had plenty of space, and plenty of things to grab onto if that dinner from the night before were to disagree with you. And no, I am fine, thanks.

So when the guys all went out to party their Tuesday night away, I remained in my room, working, reading, and lounging on the king size bed. If I got bored of the bed, I stood up, walked twenty paces, and sat upon the sofa. After a spell there, perhaps a lap around the mini kitchen just to see if anyone left anything interesting in the cabinets or the small fridge. Nope, nadda. And so back to the bed, stretching now and basking in the openness of the room. Just like the West, this room was large, and the view wasn’t too bad either.

Snow peaked mountains were visible from the windows. However, everything under those peaks was, well, beige. The land was brownish, beige, and very colorless. (Although I suppose beige is a color, just not a very vibrant one.) To a visitor, it was remarkable just how many things could be beige, from houses, hotels, gas stations-everything a shade different but of the same color palette as the hills that surround.

After leaving Ohio and having seen very little but gray and white for the past two months, beige wasn’t a bad alternative. It did take me a night to truly appreciate what I saw while on this trip, and I am glad I have allowed myself the time to reflect without passing immediate judgement. My traveling companions were a tad more quick on their ruling, but I am glad that I have seen what I have seen and glad I put the phone and the iPad down long enough to watch out the window.

As much as I was uncomfortable in that car, I saw some beautiful parts of this country. I saw antelope on a hillside, cows in a pasture (even one who might have made good use of those bars in my bathroom). I saw a small plane flying in the distance doing maneuvers, steep turns, and slow flight. I saw the clouds form over the tops of the mountains, dark on one side, light on the other. I did see many trailer parks in the lowlands, and then as the elevation rose, the houses formed to mansions in amongst the rocks.

I saw hay bales that were stacked five or six high in a field with horse and cow both mingling about for an evening chew. A pig farm came and went, but the smell lingered for a few extra miles. There were brick homesteads that probably dated back a hundred years; now desolate, broken, and in rubble. The train lines ran strong along the interstate, but some old train depots were falling down, and a few discarded box cars just lie in the open pastures, weeds growing thick and tall along their rusted sides.

The landscape was a wonder and a mystery. It conjured the American pioneer spirit for adventure, exploration, and a place where the men were strong and the women can bench press a bull.

Yes, I do love the American west. It still feels like a free land, just a little bit untouched and unspoiled. I met a man this trip who has worked in his Factory for twenty-two years. There was no doubt in my mind he was very good at his job, took pride in it, and was well respected. They are closing his place of employment, but with a job offer in hand, a chance to make a new start and possibly a promotion, he won’t take it because it would mean he would have to leave his mountains, his home, and his adventure. That is something to respect.

I return to home now, and my view is of those sitting in first class getting pampered. But my heart remembers the vast beauty of the west and looks forward to the day I can return there with my wife and dogs, living another adventure in the chapter of our lives. 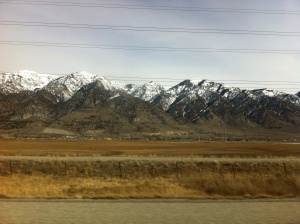