A new challenge has been set. And its a good one. We are to do 50 airports this year. Does not matter where, the size, events, or anything other than making it there, landing, and returning back.

Today began with airport number one. Lakefield, Ohio. Taking off in a sunny but cold day, the air proved to be a bit more choppy than anticipated and the cabin heat just warmed my pinky toe. We ran under a scattered to broken cloud layer and gazed through the haze to the north, looking for a break in the clouds so we could climb higher and into smoother air. The day was just deceiving, and the heart was wanting warm and calm winds. Instead we got cold, the kind that just seeps into your bones. 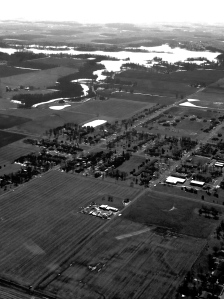 The landscape was barren and flat, just the occasional barn, pond, or tiny country town to use as dead reckoning points. Approaching our destination, a Cirrus was also making their way into the traffic pattern and flying the RNAV approach. I gave that pilot breadth, though I could have easily snuck in ahead of him. But we were in no rush, and I’d just as soon let that faster plane take the lead. Faster or not, though, he took his time on the approach, causing us to extend our downwind much farther than I would otherwise. And he certainly took his time getting off the runway, using a good half just to taxi out. One thing about our Stinson, you land her right and you’re off the runway in 400 feet. So when you come in on a 4,000 foot long runway, well, you might as well get out the road trip play list. It’ll take at least a couple songs to taxi to the gate. 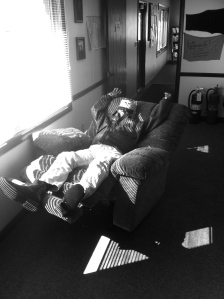 Other than that Cirrus pilot, there was not a sole at the airfield. It felt cold, barren, and dead. However, they did have comfortable chairs. 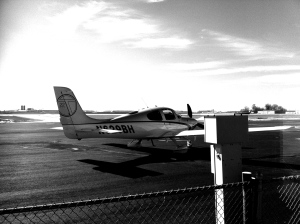 After the duly required bathroom break, we left the silent airfield behind and headed over to Neil Armstrong Field, just 10 miles east. I decided not to land. After all, we had just departed Lakefield and the engine had barely a chance to warm up again. Instead, we circled the field and looked for signs of life below. Nothing. 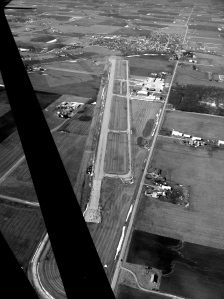 Big Red performed perfectly on the short flight today. However, though my heart was willing to stay and fly all day. My bones were frozen. The weather was a Siren in disguise, sunny yet bitter with visibility limited by the haze.

Tomorrow, though, it will break 60 degrees. Perhaps I need to leave work early… 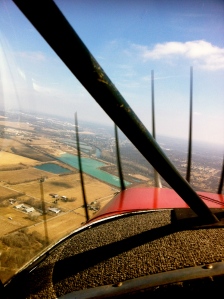